You have permission to edit this article.
Edit
Home
News
Weather
Events
What's On?
Contests
About Us
Bright Side
Wisdom From Idaho’s Best
Proud To Be Local
$$ Deals 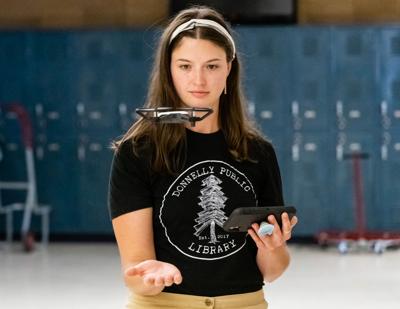 A group of teachers brought out their inner school-kids playing with drones.

It’s part of a program being taught to them so they can teach their students about STEM education.

“Everything is hands-on so teachers are experiencing it as if it were their students,” says Liebel.

One teacher looked like she was having a blast, and learning just like one of her students.

She has been part of the three-day program, but she’s not alone.

Teachers are able to participate in this program thanks to the STEM Action Center.

“They funded this grant and so we’re happy that we can lead teachers through the drone designers and coding with drones program,” says Liebel.

The main goal for this program is to funnel the knowledge the teachers learn to their students.

The program developer believes STEM education has become more vital than ever in schools, but it’s not being utilized like she thinks it can.

That’s why Liebel thought drones were a perfect choice to grab the attention of kids that could find interest in science, technology, engineering, or mathematics.

“A hook for these kids is just seeing the drone maneuver in the air and have a costume on so they’re engaged in it and they want to fly the drone,” says Johnson.

According to the Idaho Department of Labor 19 of Idaho’s 20 hot jobs through 2026 require STEM skills.

99 percent of Idaho parents believe STEM skills will play an important role in the future according to STEM surveys.

“A program like this that explores steam, science, technology engineering, arts, and math, is really preparing them for the future,” says Liebel.

One thing is for certain in any case.

There’s nothing wrong with exploring your options.

“We don’t always know what to expect, but if you have the skillset to adapt, you can do anything,” says Liebel.

At the School District 25 board meeting on Tuesday, the Board of Trustees voted three to two to require masks and face coverings starting Monday, September 27. This will be for all grades, kindergarten through 12th. Read more

On the last Saturday of summer, dozens gathered to celebrate the gift of life.  Read more

“When an individual hits a crisis and they don’t have the coping skills to deal with it, that’s when they need to be in a more secure space," said Chief Nursing Officer at Madison Memorial Hospital Kevin McEwan. Read more

“This place was like an ant hill with screws, screw drivers,” said Father Johnny Fisher reminiscing about the first days of building Brooklyn’s Playground in Chubbuck.  Read more

Community members across the region also aim to honor the lives lost on 9/11, like the Pocatello AMVETS. Read more

A ceremony to remember the events of 20 years ago was held on the front steps of the Bannock County Courthouse Saturday morning.  Read more

One Critically Injured in Officer Involved Shooting in Idaho Falls

Community members across the region also aim to honor the lives lost on 9/11, like the Pocatello AMVETS. Read more

A ceremony to remember the events of 20 years ago was held on the front steps of the Bannock County Courthouse Saturday morning.  Read more

One Critically Injured in Officer Involved Shooting in Idaho Falls

Have questions about receiving our station using an antenna?